GINGER: A SPICE WITH MANY HEALTH BENEFITS 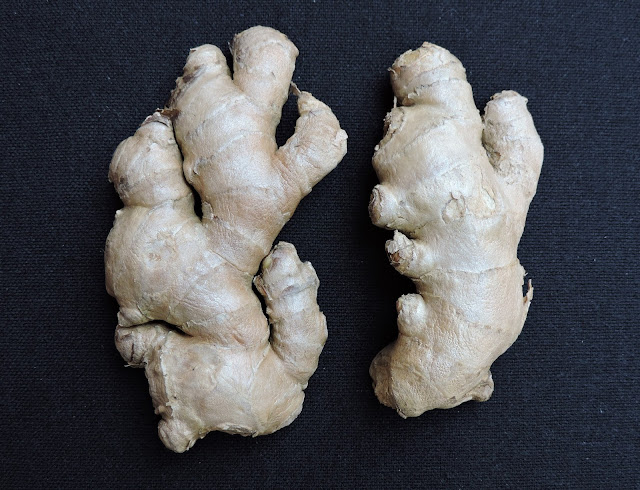 Ginger is a widely used spice obtained from the rhizomes of Zingiber officinale. It is a common condiment used in various foods, beverages and folk medicine. Ginger is mostly consumed as fresh in vegetables and meat dishes. However, dried powder, slices preserved in syrup and candy are also available. In India, it is frequently used for flavouring tea. The calorific value of fresh ginger is 67 kilo calories. The characteristic aroma and flavour in ginger are due to the presence of gingerol, shogaol, neral and geranial.

Ginger is believed to be originated in the tropical rainforests from the Indian subcontinent to Southern Asia. It exhibits considerable genetic diversity in this region and might have originated as a ground flora in lowland forests. Many wild relatives of ginger are still occurring in this region. It was one of the first spices exported from India and adjoining countries. Archaeological evidences suggest that ginger was used by ancient Greeks and Romans. 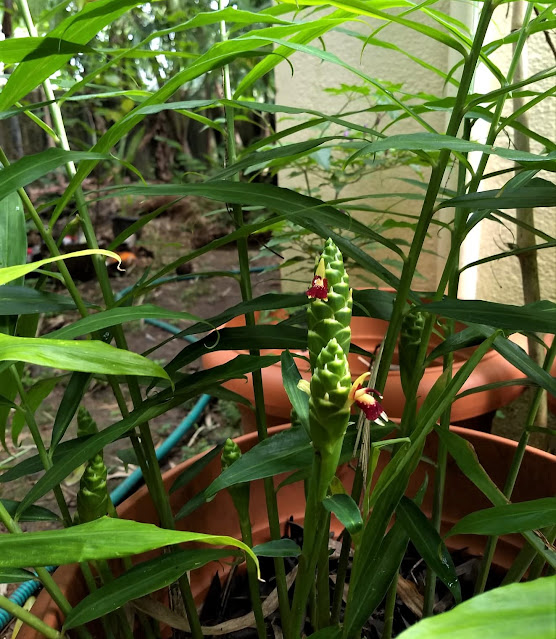 Ginger (Zingiber officinale) is a perennial herbaceous plant, which survives through a fleshy rhizome. Many fibrous adventitious roots arise from the rhizomes (underground stem). Pseudostems (false stem made up of rolled bases of leaves), arising from the underground rhizomatous stem, are erect, slender, rounded, annual and invested by smooth sheaths of leaves. Pseudostem can grow to a height of 50–100 cm.  The leaves are distichous (arranged alternately in two rows) and subsessile. Each leaf is divided into basal sheath and terminal lamina. The basal part of the leaf forms a rounded sheath to form a stem-like structure called pseudostem. The lamina of each leaf is narrow, linear-lanceolate and approximately 17.0 × 1.8 cm in size. Lamina has a prominent midrib. The second and later stems are shorter in length as compared to the main stem. The inflorescences arise directly from the rhizome and bear flowers. The flowers are pale-yellow and streaked with purple. Fruit, which develops only rarely, is a triangular-oval capsule containing numerous blackish seeds. 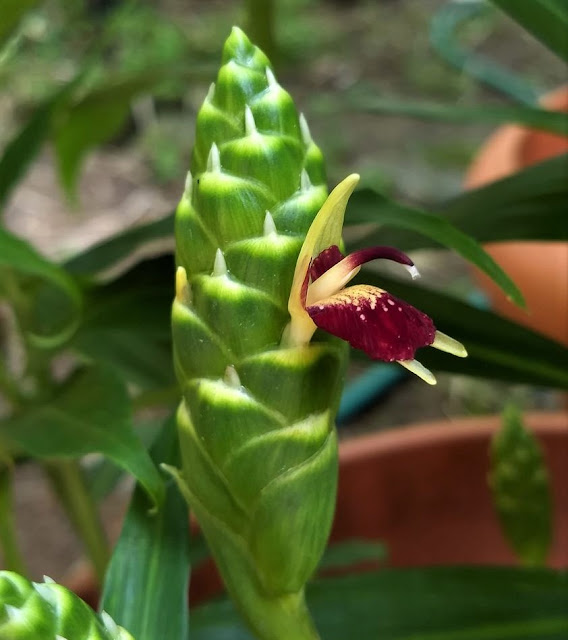 Ginger can be successfully grown in a warm and humid climate up to 1500 m altitude. A moderate rainfall at the sowing time, well-distributed showers during the growing season and dry weather for about a month before harvesting are necessary conditions for the successful cultivation of the ginger crop. A well-drained loam soil with a pH of 6.0 to 6.5 and rich in humus is best for ginger. The ideal temperature range for ginger cultivation is 19-28°C. Mostly, it is cultivated during the summer season. The land is ploughed 4-5 times to bring the soil to fine tilth. Well decomposed farmyard manure or compost is added to the fields @ 20-30 tonnes/ha before planting. The beds of about 1 m width, 30 cm height and convenient length are prepared. Ginger is propagated through rhizomes. The rhizomes are cut into small pieces of 2.5-5.0 cm in length and treated with mancozeb @  0.3% (3 g/L of water) for 30 minutes. They are shade dried for 3-4 hours and planted at a spacing of 20-25 cm along the rows and 20-25 cm between the rows. The crop matures in 210-240 days after planting. However, rhizomes can be harvested after 180 for vegetable purpose. Harvesting is generally done manually by lifting the rhizome clumps carefully with a spade or digging fork. The rhizomes are cleared of dry leaves, roots and soil. 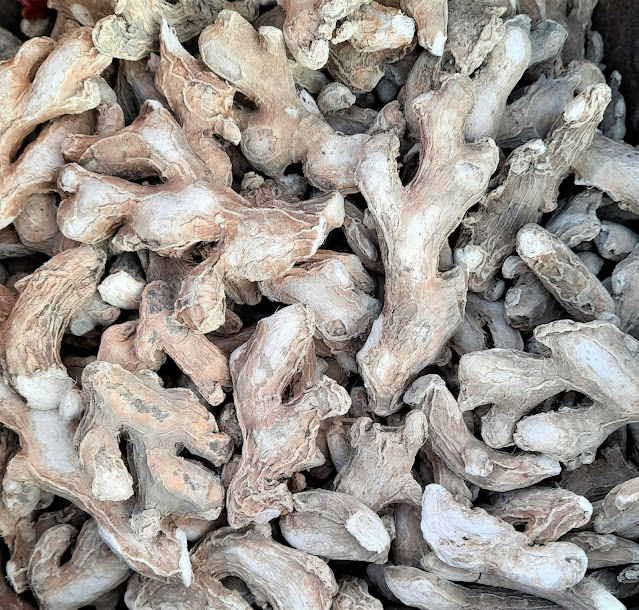 The characteristic aroma and flavor of ginger is due to presence of volatile oils (1-3% of fresh weight; chiefly sesquiterpene, monoterpene and oxygenated monoterpenes). The main volatile oils are zingerone, shogaols and gingerols. Gingerols, which impart pungency to the fresh ginger rhizomes, are converted into zingerone during the drying, making dry ginger less pungent with spicy-sweet aroma. The general chemical constituents in fresh ginger are  80.9% moisture, 12.3% carbohydrates, 2.3% protein, 0.9% fat, 0.9, 2.4% fibre, 1.2% minerals and vitamins.

USES
1. As a Spice: The fresh as well as dry (sonth) rhizomes of ginger are used as  spice for flavouring various foods throughout the world. It is widely used as a seasoning in Indian, Chinese, Korean, Japanese, Vietnamese and many South Asian cuisines. Meat and seafoods are also flavoured with ginger juice. Powdered dry ginger (sonth) is an integral part of Kashmiri and Himachali dishes. 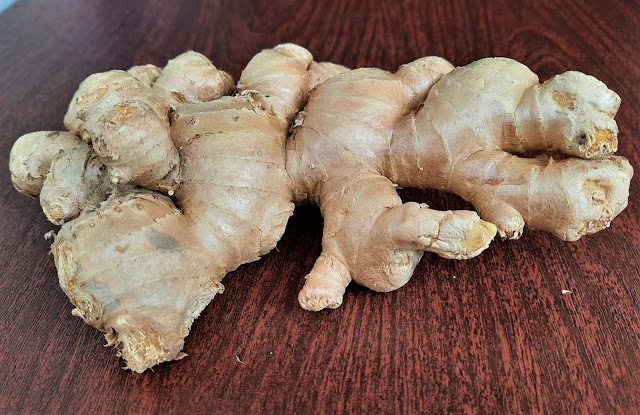 2. Medicinal Uses: Ginger has excellent medicinal properties. It is used as an ingredient in many Ayurvedic, Unani and traditional medicinal preparations. Ginger has been used traditionally to aid in digestion, to treat stomach upset, diarrhoea and nausea. It is reported to have antioxidant, anticarcinogenic, anti-inflammatory and antitumour activities. Ginger tea is given to persons suffering from cough and cold. Ginger increases the rate of perspiration and gives a feeling of warmth.

4. Pickles: Ginger can be pickled in vinegar, sherry or citrus juice.

5. Ginger Powder: The powdered dry ginger is used for flavoring some recipes such as gingerbread, cookies and cakes.

6. Ginger Candies: Ginger can be made into sweet candies.