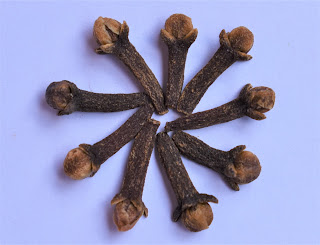 Clove (Syzygium aromaticum) is one of the most ancient and valuable spices. The clove of commerce is dried, unopened and aromatic flower buds of an Oriental tree. As the flower buds resemble irregular nails, the word ‘clove’ is considered to be derived either from the Latin or French words clavus or clou (meaning nail). Indonesia (production about 50,000 tonnes),  Tanzania, Indonesia, Madagascar, Cameroon and Sri Lanka are the major producers and clove-exporting countries. In India, clove is cultivated to Kerala, Tamil Nadu, Karnataka, Andaman & Nicobar Islands. The world production of clove is at around 80,000 tonnes per annum. Saudi Arabia, USA, France and India are the major clove importing countries in the world. In India, 2340 hectares of land is under clove cultivation and annual production is around 1200 tonnes. Clove has a calorific value (energy) of 286 and 159 kilo calories for dry and fresh cloves respectively.

Cloves are native to Moluccas or Maluku Islands (known as Spice Islands) in Indonesia. Many archeological findings point out that cloves were traded even in the pre Christian era. Samples collected from Syria are dated back to 1721 BC. Cloves were traded by Muslim sailors and merchants during the Middle Ages through sea routes.

Clove plant is a medium-sized evergreen tree growing to a height of 10–20 m. It can live up to 100 years or more. The stem is much branched and has grey bark. The leaves are elliptical in shape and arranged oppositely. Leaves are highly aromatic due to presence of oil glands containing volatile oils. Flowers are borne in terminal cymes with three flowers in each group. Flowers are highly fragrant, crimson-coloured and borne on a cylindrical base. The flowers are bisexual having four sepals, four petals, numeral stamens and a single carpel. Sepals are surrounded by fleshy hypanthiums. The fruit is 1.5-2.5 cm long purple drupe.

Clove is a tropical plant which thrives well in warm and humid climate. A temperature of 20-30°C and an annual rainfall of 150-250 cm is best for its cultivation. It can grow well on deep and rich loamy soils. Plant is propagated through seeds. Naturally fallen mature fruits are collected and sown directly in nurseries ad they loose viability within one week only.  Seedlings, about two years old, are transplanted in the field in well prepared and manured pits. However, it is a slow growing plant and takes very long to bear flowers. It starts bearing flowers when the plants are 8-10 years old but full bearing stage is achieved in about 20 years. Flowering takes place from September- October (in plains) or December-February (hills). The flower buds become ready for harvesting in about four months. The unopened flower buds are picked by hand when they start turning into pink from green. They are dried and packed. A fully grown tree produced about 2 kg of dried cloves annually.

The characteristic aroma and flavour in clove is due to the presence of biomolecules eugenol and eugeneyl acetate. Good quality clove buds contain 15–20% essential oils dominated by eugenol (70–85%), eugenyl acetate (15%) and β-caryophyllene (5–12%). The other constituents are methylamylketone, methylsalicylate, α- and β-humulene, β-ylangene and chavicol.

1.      As Spice: Cloves are widely used in curry powders and masalas. They are used in almost every dish or cuisine made in North India. They are mostly mixed with other spices. They find extensive use in ‘biriyanis’ to enhance flavour of the rice in South India.

2.      Flavouring of Meat: Whole and ground cloves are used to enhance the flavour of meat and rice dishes.

3.      Medicinal Uses: Cloves are highly valued in medicine. They are reported to have carminative, antispasmodic, anodyne (painkiller), antipyretic, stimulant, anti-inflammatory, natural anthelmintic, antibacterial, antiviral and antifungal properties. The medicinal properties of clove are due the presence of eugenol. They are important component of Indian Ayurvedic medicine, Chinese medicine and western herbalism. Traditional Ayurvedic healers in India have used cloves since ancient times to treat respiratory and digestive ailments. Zheng et al. (1992) reported that sesquiterpenes, β-cayophyllene, a-humulene and eugenol present in clove oil have potent anticarcinogenic activity (through induction of detoxifying enzyme glutathione-S-transferase) in mouse.

4.      Incense Material: They are an important incense material in Chinese and Japanese culture.

6.      Industrial Applications: Clove oil is extensively used in toothpastes, perfumes, chewing gums, soaps and mouthwashes. It is also used as a clearing agent in histological studies.