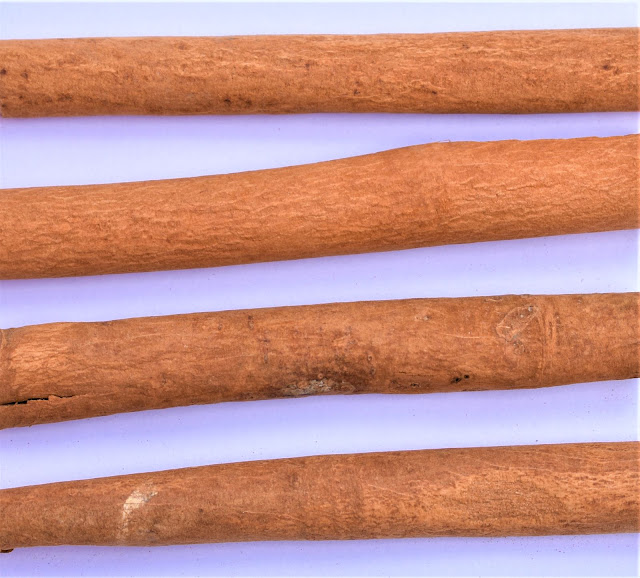 Cinnamon is a spice obtained from the inner bark of several tree species from the genus Cinnamomum. However, true cinnamon known as Ceylon cinnamon is obtained from Cinnamomum verum. Cinnamon possesses a delicate and spicy aroma due to presence of volatile essential oils such as cinnamaldehyde and eugenol. Cinnamon is among the earliest and popular spices used by mankind. Ceylon cinnamon, a native of Sri Lanka, is cultivated in the lower elevations of Western Ghats in Kerala and Tamil Nadu. Sri Lanka is the major country growing Ceylon cinnamon (considered best quality cinnamon) on an area of about 24,000 hectares and  producing 12,000 t quills (long, compound rolls of cinnamon bark) per year. Total world production of cinnamon at present (FAOSTAT, 2016) is about 223,575 tonnes per annum. Top cinnamon producing countries (all types of cinnamon) are Indonesia (91,300 tonnes),  China (77,055 tonnes),  Vietnam (35,516 tonnes),  Sri Lanka (16,931 tonnes) and  Madagascar (2,460tonnes).
Origin and Domestication
The true cinnamon, Cinnamomum verum, is a native of Sri Lanka and South India. The source of cinnamon remained a mystery to the Western world in the medieval times and was thought to be brought from Red Sea to the trading ports of Egypt. The source of cinnamon became known to the western world only at the end of thirteenth century. The Dutch traders controlled the entire business of cinnamon in Sri Lanka by 1640. Lord Brown of the British East India Company established Anjarakkandy Cinnamon Estate in Kannur (then Cannanore) district of Kerala in 1767. 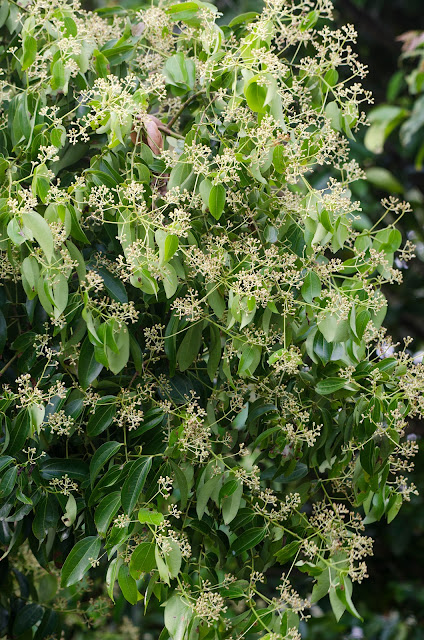 Morphology
Cinnamon (Cinnamomum verum) plant is a small evergreen tree growing to a height of 10-15 m. However, plants in cultivation are small and bushy due to regular trimming. The stem is highly branched and covered with thick grey bark. The bark tissue is characterized by presence of secretion cells containing mucilage or oil. The leaves are variable in size, opposite, ovate-lanceolate or elliptic in shape and 7–18 cm long. They are triplinerved with the two basal lateral nerves reaching the tip of the leaf. Oil  and  mucilage  cells  are  always  present  in  both  the mesophyll  layers. The inflorescence is a panicle with pale yellow or greenish-coloured small flowers. Flowers are  actinomorphic,  bisexual and  trimerous. The perianth is arranged in two whorls of three each. Androecium is made up of 9 stamens arranged in three whorls. A single carpel has one superior ovary with one pendulous ovule. Fruit is a fleshy, one-seeded, ovoid and black or purplish black-coloured berry.

Cultivation
Cinnamon is a hardy plant and can be grown on a wide range of soil types and under climatic conditions. It is grown on laterite and sandy soils with poor nutrients in the West Coast of India. Cinnamon is mostly grown as a rainfed crop. An annual rainfall of 200-250 cm, warm weather and altitude up to about 1,000 m is ideal for its cultivation. It is propagated through stem cuttings, air layering and seedlings. Semi hardwood cuttings of about 10 cm length with 2 leaves are more successful and give better results. Cinnamon tree is grown for about two years and then coppiced (cut) to the ground level. The harvested shoots are processed into cinnamon of commerce. Many new shoots (about a dozen) arise from the roots to replace those that were cut to the ground. About two years old shoots are again cut to the ground level and again processed. This process continues for many years.

Many different species of Cinnamomum are often sold as cinnamon in the markets. They are:
Processing
The shoots are harvested and cut into straight pieces of 1-1.25 m length. They need to be processed immediately after harvesting when the inner bark is still wet. The rough outer bark of the harvested stem is scraped off. Thereafter, peeling is done by using a specially made knife, which has a small round end with a projection on one side to facilitate ripping of the bark. A longitudinal slit is made on the stem from one end to the other.  The bark can be easily separated by working the knife between the bark and the wood. The separated bark is first dried in the shade for one day and thereafter in the sunlight for next four days. The separated bark contracts and assumes the shape of a quill during the process of drying and hence called quill. The dried quills are cut into 5-10-cm lengths and packaged for sale.
Improved Varieties
Nithyasree and Navasree
Chemical Constituents
Cinnamon possesses a delicate and spicy aroma, which can be attributed to the presence of volatile oils. The major component of leaf oil is eugenol, while that of bark oil is cinnamaldehyde. The volatile components can be broadly classified into monoterpenes, sesquiterpenes and phenylpropenes. The volatile oil content in the bark of Ceylon cinnamon varies from 0.4 to 2.8% and contains 75% cinnamaldehdyde, 5% cinnamyl acetate, 3.3% caryophyllene, 2.4% linalool and 2.2% eugenol. In leaf, volatile oil content varies from 0.24–3.0% and contains 65 to 92%eugenol. On the other hand, both leaf and bark oils of Chinese cassia contain mainly cinnamaldehyde (60-90% of the oil content).
General chemical composition of bark is:  carbohydrates 59.5%, protein 4.6%, fat (ether extract) 2.2%, fibre 20.3%, total ash 3.5%, calcium 1.6%, phosphorus 0.05% and other minerals.
Uses
1.      Universal Spice and Condiment: The inner bark of cinnamon tree is used as a condiment for flavouring foods, meat, sweats and other food stuffs.    Cinnamon and sugar are used to flavour cereals and bread-based dishes in the United States.
2.      Cinnamon Oil: Volatile oils such as eugenol and cinnamaldehyde obtained from cinnamon bark and leaves are used in perfumes, incenses, confectionary, chewing gums, chocolates in Mexico and other food items. It is also is  used  for  flavouring   pharmaceuticals and soaps.
3.      Medicinal Uses: Cinnamon has a long history of use in traditional medicine in various parts of the world. It is used as an ingredient in many Ayurvedic and Unani medicinal preparations. It has been proved to be useful in cough, cold, diabetes and in regulating cholesterol. Cinnamon possesses various biological activities, such as expectorant, carminative, antioxidant, antimicrobial, antidiabetic, immunomodulatory, anti-inflammatory, antipyretic, analgesic and anti-allergic.
4.      Insecticidal activity: Cinnamon oil possesses insecticidal properties.
5.      Nematicidal activity: Cinnamon oil also possesses nematicidal activity against some nematodes.
6.      Flavouring of Alcoholic Drinks: Cinnamon oil is used for flavouring alcoholic beverages, such as wines, whisky, vodka and brandy.