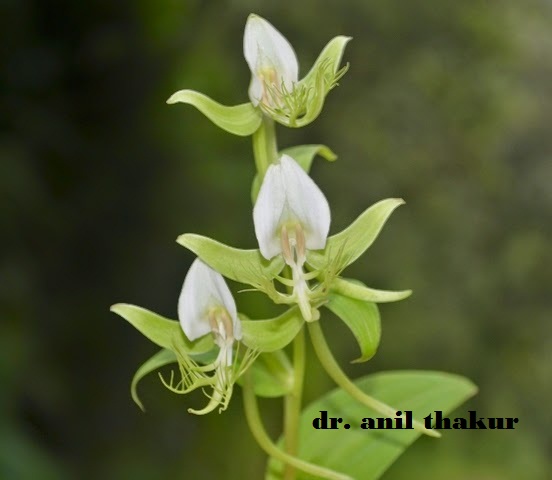 
Hindi name: Vridhi
Ayurvedic names: Riddhi, Laksmi, Mangala, Rathanga, Risisrista, Saravajanpriya, Siddhi, Sukha, Vasu and Yuga
Botanical name: Habenaria intermedia
Family: Orchidaceae (Orchid Family)
Distribution: In North West Himalayas on the grassy slopes between 2000-3000 m above mean sea level.
Medicinal uses: It is an important member of rasayana herbs in Ayurveda and constituent of Ashtavarga (a group of eight rejuvenating medicinal herbs) and Indian traditional tonic Chyvanprasha (polyherbal rejuvenator).  The tubers of the plant are sweet and emollient (having a softening or soothing effect especially to the skin). They are used as brain tonic, aphrodisiac, depurative (remove impurities from the body), anthelmintic (capable of expelling or destroying parasitic worms), rejuvenating and general tonic. The tubers are also useful in asthma, leprosy and skin diseases. It has strong antioxidant and nitric oxide scavenging activity, which can be assigned to scopoletin and gallic acid or their synergistic properties and may be helpful in preventing premature aging. The tender leaves and tubers are edible and cooked as vegetables.

The IUCN has categorized it as an endangered species. The plants are rapidly disappearing due to indiscriminate digging for their medicinal tubers.