Black pepper is a perennial climbing vine grown for its berries that are extensively used as spice and in medicine. It can be variously processed to prepare black, green, red and white peppercorns. Black pepper, native to south India, is extensively cultivated in the Oriental tropical regions. Black pepper is generally referred as ‘king of spices’ or ‘black gold’, due to its widespread use, great commercial importance as well as its innumerable medicinal applications. It finds an important place in every kitchen and deserves a royal recognition. It is one of the most common spices added to cuisines worldwide. It used to be one of the very first items of commerce between India and Europe. It was valued so important in old times that many expeditions were made in search of peppercorns. Sometimes, it was used as commodity money in trade during the medieval times due to its very high value. It is the most traded spice in the world.  The calorific value of dry and green peppercorn is 304 and 98 kilo calories respectively. The characteristic aroma and pungency in black pepper is due to presence of piperine, S-3-carene and β-caryophyllene.
Vietnam is the largest producer (216,432 tonnes annually) and exporter of black pepper in the world, contributing 34% of the world's harvest (FAOSTAT, 2015). Other major pepper producing countries are Indonesia (89,000 tonnes), India (55,000 tonnes),  Brazil (42,000 tonnes) and China (31,000 tonnes). An area of 527,848 hectare was under pepper cultivation in the world in 2016, which produced 546,259 tonnes of peppercorns. An area of 129000 hectare is under pepper cultivation in India (FAOSTAT, 2016) with a production of 55,000 tonnes of peppercorns. In India, it is mostly cultivated in Kerala (more than 90% production), Karnataka and Tamil Nadu. 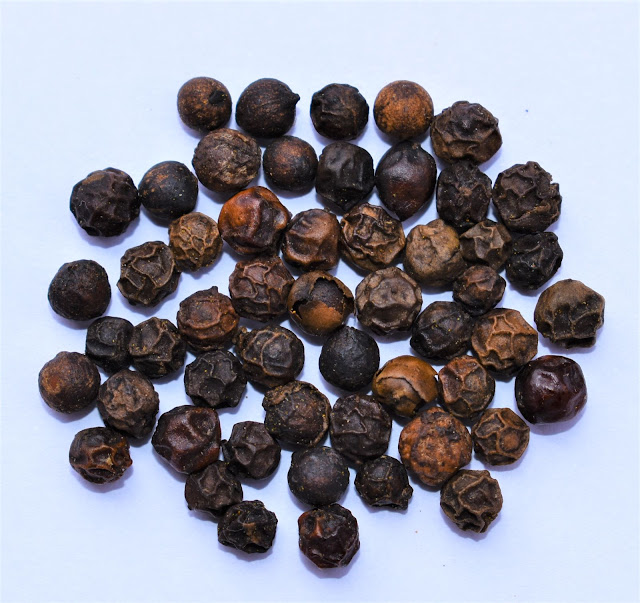 Origin and Domestication
Black pepper is believed to be originated in south India, South Asia and Southeast Asia.  It is known to Indians since very long and is integral part of Indian cooking since at least 2000 BC. It was grown in southern Thailand, Java, Sunda, Sumatra, Madagascar and Malaysia during the medieval times.

Botanical Characteristics
The black pepper (Piper nigrum) plant is a week-stemmed, glabrous, perennial and woody climbing vine. It can grow up to a height of 4-6 m on supporting trees (sometimes also on poles or trellises). However, vines can grow to 8-15 m in wild conditions. Stem is branched, has long internodes and develops roots on the nodes which help in climbing. It has two types of branches, the orthotropic climbing branches and the plagiotropic fruiting branches. Leaves are simple, alternate and often unequal sided. They are coriaceous, dark green and shiny above and pale and gland dotted below. The lamina shape is cordate to ovate in orthotropic branches and ovate to ovate-elliptic on plagiotropic branches.  Inflorescence is a pendant spike borne opposite to the leaf on fruiting branches. The spikes are 2-17 cm long and bear up to 100 minute flowers. Cultivated vines are monoecious exhibiting variability in the composition of male, female and hermaphrodite flowers. The high yielding cultivars have 70-100% bisexual flowers. The black pepper is a self pollinating plant. The fruit is a sessile globose drupe (though known as berry) with a pulpy pericarp. The green unripe fruits turn red on ripening and turn black after drying. Each has a minute embryo with little endosperm and copious perisperm. 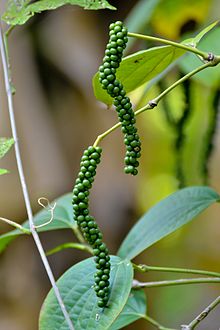 Cultivation
Black pepper crop can be successfully grown in humid (rainfall of 125- 250 cm) and warm tropical climate. Plants prefer fertile and well drained loam soil. The seeds, although fully viable, are not commonly used for raising nursery plantations.  Black pepper plants are propagated through cuttings taken from runner shoots (which originate from the base of the vine and creep on the ground) to obtain genetically uniform nursery. The runner shoots develop roots at each node on the ground. The rooted cuttings are planted during the rainy season. The pits of 50 cm3 at a distance of 30 cm away from the base are prepared on the north, eastern or north eastern side of the supporting trees.
The pits are filled with a mixture of top soil, farmyard manure @ 5 kg/pit and 150 g rock phosphate. Two to three rooted cuttings of black pepper are planted individually in each of the pits after the onset of monsoon.  The vines are allowed to climb on the supporting trees (also called standard). Sometimes, they are allowed to trail only up to 1.5 m, and thereafter, separated from the standard and again buried in the soil near the standard. This induces development of more leader shoots, covering of the entire standard and development of more laterals from the base of the standard. Most favoured supporting trees for black pepper in India are coconut, areca nut, mango and jack-fruit. ICAR-Indian Institute of Spices Research has recommended manuring in May with farm yard manure @ 10 kg per vine and with NPK @ 50: 50: 150 g/vine/year, when the vines become 3 years old and above. Azospirillum can also be used as a biofertilizer ( @ 50 g/vine) in black pepper crop to obtain organic product. The harvesting is done manually through hand picking as soon as one or two fruits at the base of the spikes begin to turn red. The collected spikes are dried under the sun and then the peppercorns are stripped off from the dry spikes.

1.   Black Pepper: It is processed from the green, unripe drupes of the pepper plant. They are put briefly in hot water (directly dried in some cases) to clean and to prepare them for drying. Thereafter, they are dried for several days. The fruit wall shrinks and darkens into a thin and wrinkled black layer around the fruits.

2.   White Pepper: It represents the true seed of the pepper plant. Fully ripe drupes are soaked in water or heaped for about a week and allowed to ferment. After retting or decomposition, outer layer of the fruit is separated and washed, leaving behind white coloured fruits. They are dried and stored for further use.

3.   Green Pepper: It is processed from the unripe drupes like black pepper. The fresh green peppercorns are canned or treated with sulphur dioxide or freeze-dried to retain the green colour.

4.   Red or Orange Pepper: It consists of fully ripe red pepper drupes preserved in brine and vinegar. They can also be dried using the colour-preserving techniques followed to prepare green pepper. 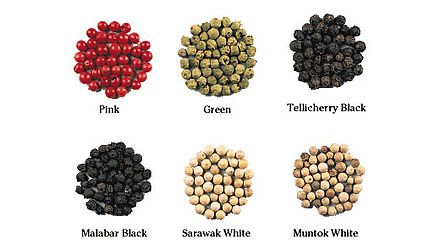 Chemical Constituents
α-Pinene, β-Pinene, 1-α-Phellandrene, Piperonal, Dihydrocarveol, β-Caryophyllene, Piperidine,  etc.
Aromatic and slightly musty odour of black pepper is due to the presence of volatile oils found in the flesh and skin. The pungent taste of peppers is due to alkaloids and resins mostly found in seeds.

Uses
1.       Universal Spice and Condiment: Pepper is one of the oldest and world's most important spice. Because of its widespread and wide ranging uses in kitchen. It forms an integral part of all the readymade garam masala available in the Indian market.
2.       Flavouring Ingredient: Pepper is used as a flavouring ingredient in non-alcoholic beverages, candies, baked foods, meat products and cheese.
3.       Pepper Oil: Pepper oil obtained from peppercorns is used as an adjunct in flavouring of sausages, canned meat, soups and table sauces.
4.       Anti-oxidant: Various scientific studies have proved that black pepper has strong anti-oxidative properties and delays aging.
5.       Medicinal Uses: Black pepper has high medicinal value and therefore, widely used to stay healthy and also to treat various disease conditions. The pepper fruits have carminative, aphrodisiac, diuretic, anti-inflammatory, analgesic and stimulant properties. They have been reported to be useful in arthritis, asthma, fever, cough, dysentery, dyspepsia and flatulence. It stimulates the digestive juices and enzymes and promotes digestion. Recent studies have shown that piperine present in black pepper protects against different forms of cancers and also lowers the blood pressure. Black pepper delays the brain aging and also prevents Alzheimer’s and Parkinson’s disease.
6.       Insecticide: Piperine present in peppercorns is an effective insecticide against houseflies and other insects.
7.      Flovouring of Alcoholic Drinks: Piperine present in black pepper is used to impart a pungent taste to brandy in some countries.